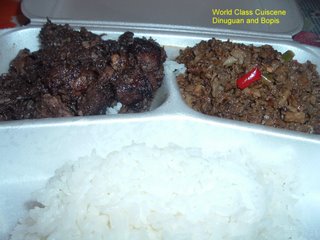 Hey I am not totally giving up on LP yet. I was lucky to get a snap shot of this pack just before my son tried to make it disappear. Dinuguan and Bopis are two recipes akin to every Filipino's menu whenever there is a party.

Bopis (right) is made out of intestines, lungs, kidneys and liver. Don't shudder if you are not familiar with this dish. Not everyone is expected to like this, even if you are a full-blooded Filipino. The pungent smell prevents me from cooking at home. The smell does stick to the carpet so I'd rather just swing by Manang's little nook and have an occasional taste of it. Manang's is not so dry, the way my father used to cook it. Father cooks it in oil until it is almost burnt. The process is long and let me relate it to you.

You see, we only have lechon once a year when I was young and that happens at Christmas time. It's a carefully planned one where mother buys a piglet about six months (maybe shorter; maybe longer I cannot recall) before then. Father and mother put a lot of work in raising the pig sometimes I wondered whether it was more economical to buy the lechon from the city market on Christmas day itself. The work was so enormous. Mother planting vegetables to feed the pig, father buying "feeds" from the store and us washing the pen or helping mother in cooking the "binugbog" were only a few.

When Christmas comes, father is not ready to give up all the odd cuts that do not become part of a lechon. Think about all the hard work we've put into that pig. After Christmas, we'd all be ready to smell the day-long process of cooking bopis. First he has to boil the innards for easy slicing, cut them into tiny pieces, boiling this time with the seasoning, and finally cooking in oil. It is all worth the wait at the end of the day. The aroma of a cooked bopis is heavenly. I do not know what makes this dish delectable. It's either we were "lechoned-out" or Papa simply cooked it in a different way.

I told you Manang's was not dry. In fact it had other ingredients that I have never seen in my Papa's. Manang put some kamias apparently to get rid of the smell. My father puts soy, vinegar, peppercorns, garlic and bay leaves in his. If you ask me whether I know how to cook this, I will honestly say I don't but I am willing to learn how to should the need arise. For now, I would just like to keep my neighbors happy!

About the dinuguan, hmmm, I am almost tempted to ask my kids to write their thoughts about it. One day..soon!
Posted by ting-aling at 8:24 AM

Bopis!!! I love this. I am reminded of meals at my grandparents' place. They are Bicolanos and they cook terrific bopis too! It's been awhile since I've tasted bopis. Yum!

I have been wanting to attempt making dinuguan. Have never tried cooking it either, although I love eating it. That's the only thing with lamans that detracts me from ever making them, the prep work and you're right, the smell.

JMom, believe it or not, dinuguan is my son's favorite. He used to even baon dinuguan for lunch.

That's so cool how your parents took care of the pig. :) Did you ever get so attached to it that you couldn't eat it for Christmas? :) :) :)

wow! sarap! nice to have you back ting!
ces
http://essences.efx2.com

I was brought up on this!! Thanks for the memories!! :)

ting-aling
A person who has so many things to do in mind but has little time to do them.